Although the promotional slogan "buy, buy, buy" can generate tens of billions of commodity transactions within a few hours, what is more worthy of attention is that excessive consumption caused by the shopping spree has exacerbated the problem of oversupply. Among them, the "fast fashion" clothing brand has a fast rate of launching new styles and a high frequency of product turnover on the shelves, causing a large amount of unsellable waste clothing piled up. So where are the clothes no one bought after being off the shelves? 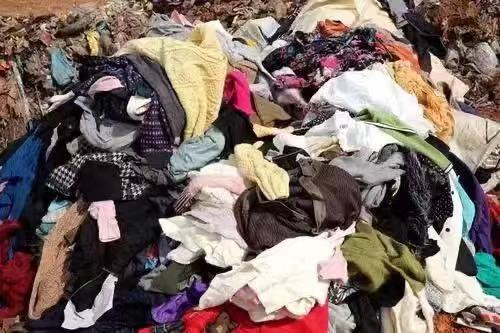 Each piece of clothing is thrown away after being worn an average of 7 times, and the textile waste in the US has increased by 811%.

The popular "fast fashion" in recent years refers to the mass and cheap clothes copied from popular styles. First of all, brand owners use fashion trends to launch cheap clothing to meet the ever-expanding consumer demand. What's more, retailers put new fashion clothing on the shelves for consumers to buy, and quickly remove those goods that don't sell well, making these clothing in an endless state of rotation.

According to reports, ASOS, a well-known British fashion e-commerce company, launches at least 5,000 new styles every week. Due to low prices and convenient purchases, the rapidly expanding production lines of fast fashion clothing have also made people's consumerism wilder. Consumers are buying more clothes, but at the same time, the frequency of discarding clothes is also higher than before.

The report "The New Textile Economy" released by the Allen MacArthur Foundation in 2017 showed that global apparel production has doubled in the past 15 years. But the utilization rate of clothes, that is, the average number of times a piece of clothing is worn before it is discarded, has dropped by 36%. Among them, in the United States, which has many fast fashion brands, research shows that in the past 30 years, the number of clothes bought by Americans has increased by 5 times, but each piece of clothing is only worn 7 times on average.

The United States "exports" 700,000 tons of used clothing every year, and the Chilean desert becomes a "clothing cemetery".

In the United States, second-hand clothes that cannot be sold or entered into textile recycling are often exported to those "distant countries." According to statistics from the U.S. Environmental Protection Agency (EPA), of the 16 million tons of textile waste generated in the United States each year, about 700,000 tons are exported overseas, and the "poisoned" are mainly third-world countries.

"Things that can't be sold in thrift stores are sold to the 'defective goods' market. This is a long and complex supply chain that is not only invisible to ordinary people, but also invisible to the people involved," Ricketts, co-founder of OR foundation pointed out. This invisible "recycling industry chain" has caused mountains of textile waste to flood the second-hand markets, beaches, and landfills of third world countries.

According to foreign media reports, at least 39,000 tons of excess fast fashion clothing are shipped to landfills in Chile's Atacama Desert every year, and the piles of waste clothing have gradually become a "spectacular" landscape on this desert. These synthetic or chemically-treated waste clothes release no less toxic substances than waste tires or plastic products and release pollutants into the air or underground waterways. It may even take 200 years to complete biodegradation.